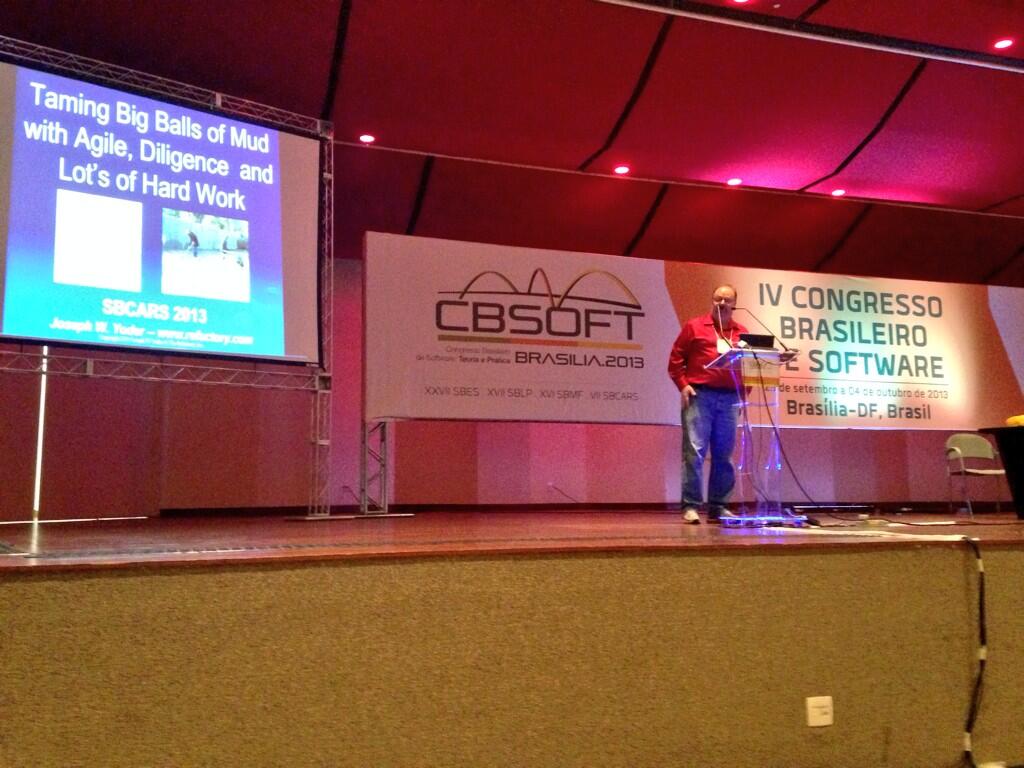 My Big Ball of Mud Tour began this year in Portugal at the Agile & Scrum Portugal 2013 conference. This leg of the trip saw me in Brazil.  This trip started on September 26, when i stopped by the National Institute for Space Research in São José dos Campos. After giving a talk about Adaptive Object-Models, I left São José and headed to the capital of Brazil-Brasilia. In Brasilia, I attended MiniPLoP and CBSoft, where I sat on one panel, gave two talks and presented a tutorial with Eduardo Guerra on TDD Step Patterns. The first talk was about Test Driven Development. The second was about "Taming Big Balls of Mud with Diligence, Agile Practices, and Hard Work." The topic of this talk referred to a pattern paper I wrote with Brian Foote in 1997 called "Big Ball of Mud," which was published in 1998 in the book Pattern Languages of Program Design 4 (Software Patterns Series) by Brian Foote, Neil Harrison, and Hans Rohnert.

Strangely enough, in that paper, Brian Foote and I made reference to Brasilia and the way it was planned similarly to Washington DC. We used this analogy to discuss how even the best laid plans don't prevent software architectures, like cities, from having entanglements. Although most cities, like software projects, don't have the luxury of major planning. Software, like cities, take on a life of their own and keeping the architecture completely clean can be a daunting task if not impossible as requirements and needs evolve. Here I am, 15 years later, in the same city discussing that very topic. Wow, Cosmic!!!

From there, it was on to a last minute invitation to be part of panel on how the Brazilian Government can better support software research. The goal of the Research, Development and Innovation in Software panel is to discuss, informally, the future of research, development and innovation in software in Brazil.

The trip wasn't all work for me, fortunately. I had a chance to reconnect with some old friends for great times, and even made some new friends as well. It seems the coincidences aren't over for me, though. After CBSoft, I headed out to São Paulo to meet up with friends and colleagues. While walking on the busy streets of São Paulo on Paulista Ave, I ran into a friend and colleague Klaus Wuestefeld who recognized me in the mass of people. He was visiting to give a keynote address at Agile Tour 2013  just a few blocks from my hotel. Wow, is it a small world or what??? Of course I had to go to the conference with Klaus and there I not only met some new friends, I also ran into someone else I knew. I love it when the cosmos are in alignment :-).

All in all, the trip has been a great success and a lot of fun. I'm headed home for a short rest before I'm off to the next city on the tour-Krakow, Poland and then on to Stockholm, Sweden!